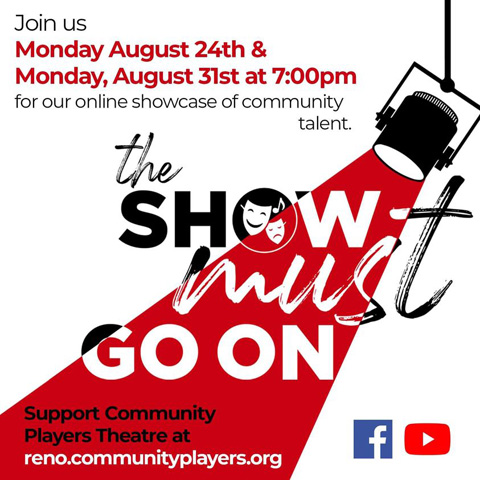 The Show Must Go On!

We have been actively pursuing ways to present theater to our patrons in a safe and meaningful way. Players were pleased to announce a series of events that we are planning to present virtually this Fall that we are calling “The Show Must Go On” series. The first event was a video showcase that shares the name of the series, The Show Must Go On. Players wanted this showcase to feature as much of our community as we could.  Auditioners either song from a musical, reading a poem or monologue, or told us how Community Players Theatre was/is important in your life, So many submissions were received that two episodes to watch on either YouTube Channel or Facebook page. were created.  There were over 66 performers and speakers that were represented by the two videos for "The Show Must Go On!".

Our first-time attempt at presenting this virtual show-type format was very successful in that many positive comments were received from the viewers over the two presentations.  Both of the productions were approximately one hour in length.  With the success of "The Show Must Go On!", Players moved forward with a four-person contemporary musical,[Title of Show].

President of Player, Intro to Show

I Will Never Leave You - Side Show

I Will Never Leave You - Side Show

PSA On giving to Player

The World Was Wide Enough - Hamilton

Give Us Cash - Parody of Be Our Guest-Beauty, the Beast

Spark of Creation - Child of Eden

Journey to the Past - Anastasia

You Matter to Me - Waitress

You Matter to Me - Waitress

Scene from A Chorus Line

Knight of the Woeful Countenance - Man of La Mancha

Knight of the Woeful Countenance - Man of La Mancha

Paris Original - How to Succeed In Business Without Really Trying

Scene from The Boy Next Door

I Have Confidence - Sound of Music

PSA-Player, If I Loved You - Carousel

PSA Player, You, Me (But Mostly Me) - Book of Mormon

Give Us Cash - Parody of Be Our Guest-Beauty, the Beast

So Much Better - Legally Blonde

A Little Bit of You - Frozen

All That Matters - Finding Neverland

When I Grow Up - Maltilda

No One Is Alone - Into the Woods

Make Them Hear You - Ragtime

She's in Love - The Little Mermaid