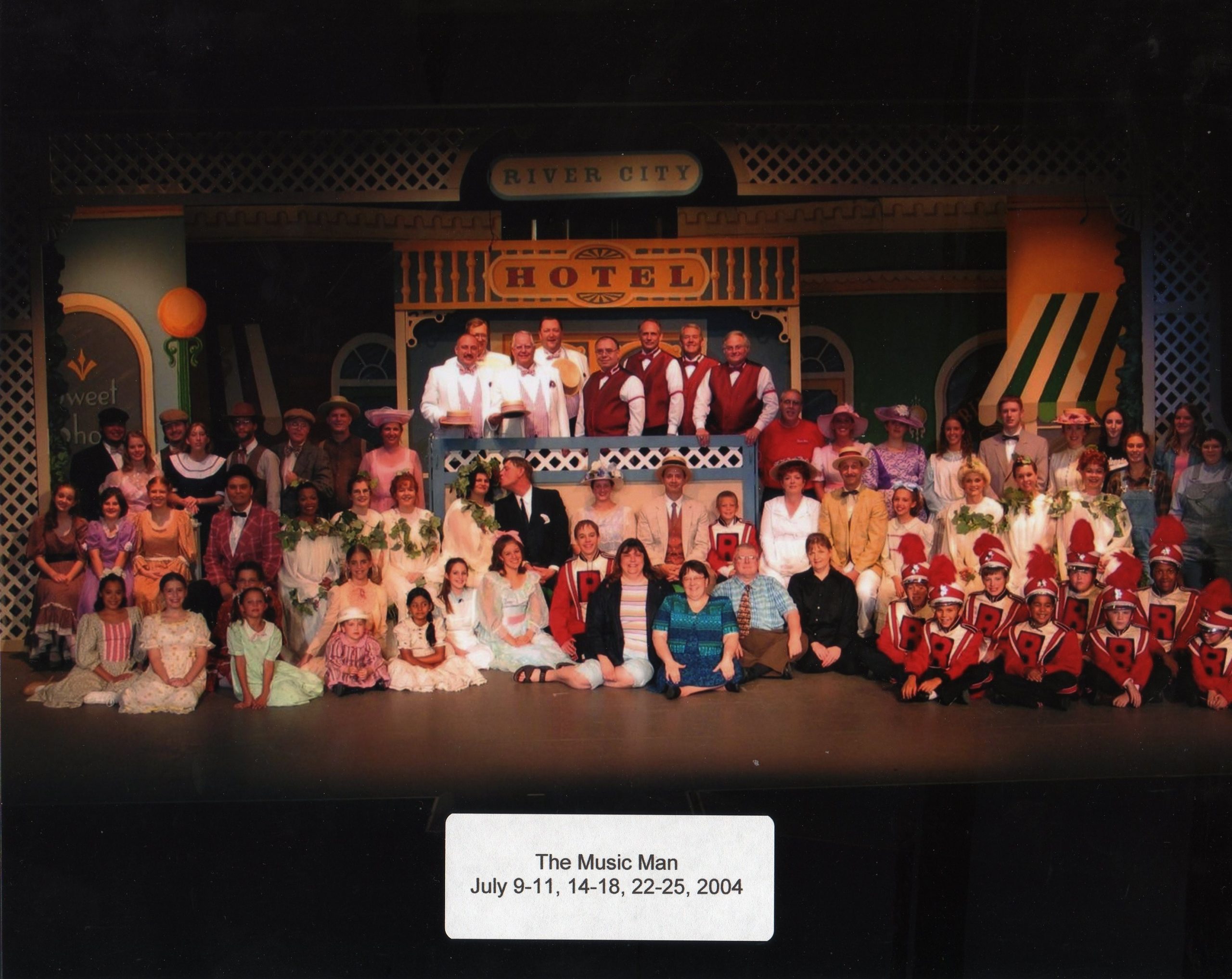 Professor Harold Hill has developed a reputation among travelling salesmen and none of it good. In order to sell his band instruments and uniforms, he promises to form a local student band. After he gets paid, it’s away – and – no band. He is concentrating this time on River City, Iowa. To focus attention on the need for a boys’ band, he attacks the town’s new pool hall as a sign of depravity creeping into the community. His argument is convincing, but it turns out the pool hall is owned by Mayor Shinn who orders the school board to check out Harold’s credentials.

When they approach him he turns them into a barber-shop quartet and disappears. An old friend has warned him about Marian, the town librarian and music teacher. To Harold this is an old problem, but his advances are met with a brick wall. Later at the Fourth of July celebration, Harold takes advantage of a disrupting prank to move in and sell his band idea. The Mayor continues to push for proper credentials, but Harold is slippery. Marian’s research pays off, but she withholds the evidence when she discovers Harold is helping her brother, Winthrop, to cure his speech impediment. With the exception of the Mayor, the town is now under Harold’s spell. Even Marian is coming around. The band instruments have arrived, but it takes a little longer for the uniforms and instruction books.

Future band members have been busily working on Harold’s “Think System” of musicianship, and Harold has just met Marian at the footbridge. She confesses that she has known he was a fake since the third day he was in town. The uniforms arrive but so does Charlie Cowell, the anvil salesman, Harold’s arch enemy. Marian tries to warn Harold, but Charlie reaches the Mayor first. Harold still has time to run, but he can’t. He’s hooked on Marian.

The angry town, hearing that he’s a fake, drags Harold to the ice cream social where everyone has gathered. The talk is ugly, but Marian speaks out in his defense. The band arrives in assorted, unaltered, uniforms. Harold is handed a baton. “Think, men, think” is his command. At the drop of his arm comes the “Minuet in G” as it has never been “played” before, and each struggling note is music to each parent’s ears. Harold has his band at last – and a truly loving librarian besides.

The Players offered the “The Music Man” as a summer fundraiser to help with the costs of the new lighting system. The show had first been performed in the 1979-1980 season and then again in the 1992-1993 season. This production had a cast, crew, and staff of over 80 people including two Illinois State University interns. The production also had the pleasure of using two quartets from Bloomington’s Sounds of Illinois Barbershop Chorus. “Harmony Guaranteed” performed for the first and third weekends. This group had worked with director Bruce Parrish on two previous versions of the show. They were eager to help train a new group, “Past Forte” to help out in any future show should there be more productions and to take over for the second weekend. For the final show, all eight members of the quartets were in attendance. During the intermissions, each group would perform and the pass around the bucket for additional donations. The production raised more than $7,800.00 toward helping to pay for the new lighting system. The show was highly praised and is always an audience favorite.