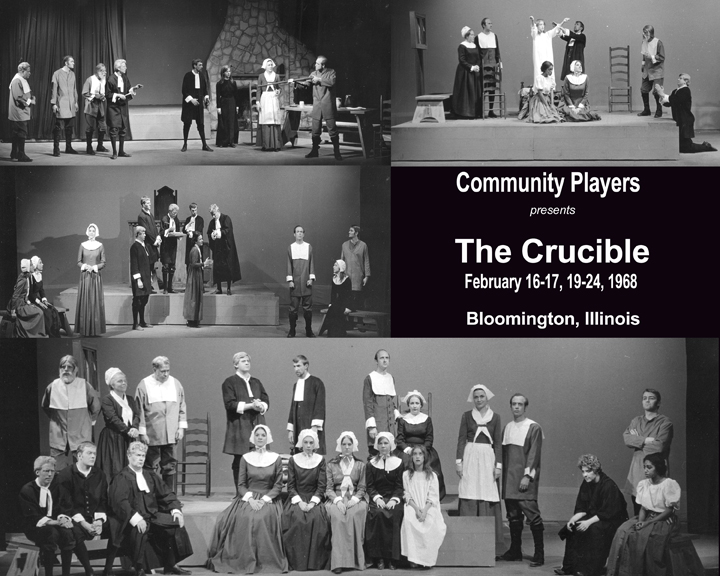 “The Crucible” by Arthur Miller is a dramatic re-enactment of The Salem Witch Trials in Massachusetts in the late 1600’s. Although the play centers on real events, it is not an actual ‘history.’ Miller changes the ages of characters and consolidated several historical figures so that there would be fewer actors on the stage. The play was first produced in 1953 as an allegory to Senator Joseph McCarthy’s hearings on the anti-communism scare of the era. “The Crucible” is a play about fear and suspicion run amok not only in the 1600’s or the 1950’s, but fears that continue with generations since.

For the opening of the production “The Crucible,” Players used their brand new lighting board that had been created by board member Art Lee. Art, who worked for General Electric, created the board with the help of their Industrial Design Department. Thanks to their efforts, Community Players was to get a new, solid-state lighting board that would triple their lighting abilities as well as increase their flexibility when lighting a show. Design work for the lighting board had begun a year earlier in February of 1967. Players final cost would be close to $1,000. On in the open market, a similar lighting system would have cost around $29,000. This system worked for Players for close to ten years before it was finally replaced in 1976.

One problem with any new type of lighting system was working the bugs out of the system, and during the witch trials, the lights created almost psychedelic effects at times. All of the bugs were worked out of the system by the final production of the season. Some remnants of this old system can still be found above the offstage right exit on the south side of the building above the old lighting dock. There are also pieces in the shop basement against the east wall.

Asst. to the Director