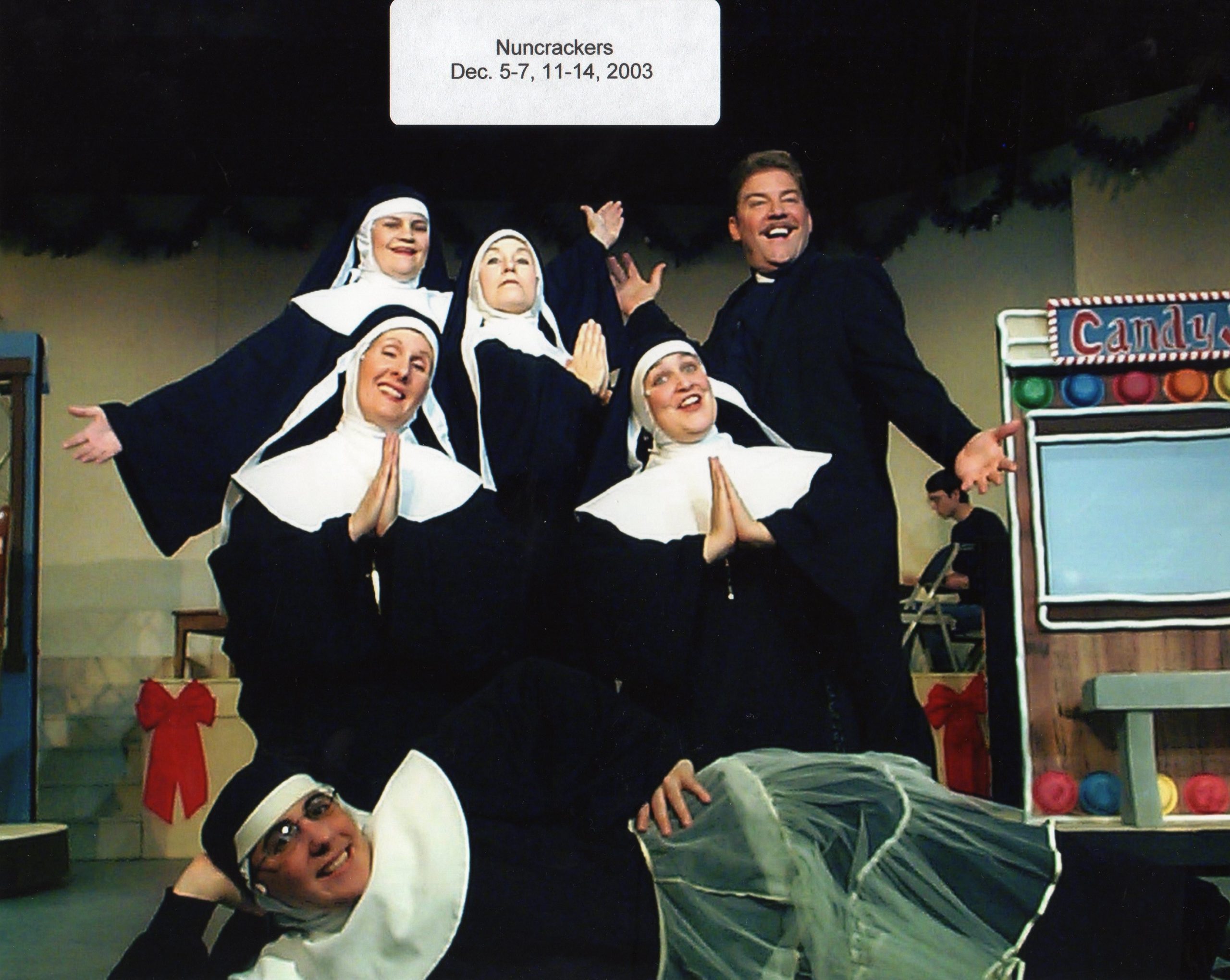 The Nunsense Christmas Musical “Nuncrakers” takes place in real time in the basement of Mount Saint Helen’s Convent. It is the first TV Special being taped in the Cable Access TV Studio built by Reverend Mother with part of the prize money won earlier by Sister Mary Paul (aka Amnesia). A live camera with two television monitors is used to create an actual TV Studio feeling for the audience.

Opening with the rousing song “Christmas Time Is Nunsense Time,” we are introduced to the cast and are given a brief update of what’s been happening in the past with everyone. We soon discover that we are to be treated to an original ballet based on the “Nutcracker” featuring Sister Mary Leo as the Sugar Plum Fairy. Unfortunately before Sister Leo makes her grand entrance, she is hit in the shin by one of the children’s batons. What to do? The show will have to proceed without the ballet until Reverend Mother can figure out how to salvage it. Sr. Amnesia holds a “Secret Santa” drawing to fill the time while Sr. Leo is being taken care of. Amusing items are given to audience members whose seat numbers are drawn as everyone joins in singing “We Wish You a Merry Christmas.”

Reverend Mother thinks she has a solution to the ballet problem (not realizing that Father Virgil has come upon the same solution) and the ballet goes forward. It is then we realize both Father Virgil and Reverend Mother appear as Sugar Plum Fairies, and the first act ends with the “dueling” Sugar Plum Fairies. After visiting with the audience, the cast takes their places as the “camera rolls” and Act Two begins with “Three Hundred and Sixty-Four Days,” a song about last minute shopping woes. This is followed by the “Living Nativity Scene” featuring the students and Sister Robert Anne singing a beautiful ballad “Jesus Was Born” in Brooklyn as she recalls the time her father returned home on Christmas Eve.

Behind the scenes the Sisters are trying to find out what happened to all the missing gifts, but on stage the program proceeds. Sister Mary Hubert and Reverend Mother sing a duet, “In the Convent (It’s a Wonderful, Nun-derful Life).” The Saint Andrews Sisters of Hoboken present “We Three Kings of Orient Are Us!” This is followed by Mother Superior’s introduction of the “Catholic Home Shopping Service” in which she offers some very unusual items for Christmas.

When the Reverend Mother is summoned upstairs to talk to the police about the stolen presents, Sister Robert Anne sings her big number “All I Want for Christmas.” There is a “sing-along” based on the titles of 25 popular Christmas carols that everyone knows. As the evening moves toward the finale, we discover that the gifts in the convent were not stolen at all… Sister Mary Amnesia had given them to a poor family. Realizing how selfish they had been, Sister Hubert leads a hand-clapping, foot-stomping, gospel song entitled “It’s Better to Give Than to Receive.”

The third production of the season was the wacky musical “Nuncrackers – The Nunsense Christmas Musical.” In this version of the Nunsense saga, the sisters of Hoboken, NJ are putting on a television special, including a version of “The Nutcracker.” This fast-paced, tongue-in-cheek musical was a big hit with Players’ audiences in performance after performance. Karen Clark as Sr. Mary Hubert had the opportunity to reprise the role that she originated in the 1998 production of “Nunsense.” In the program were special holiday greetings to all of our patrons.