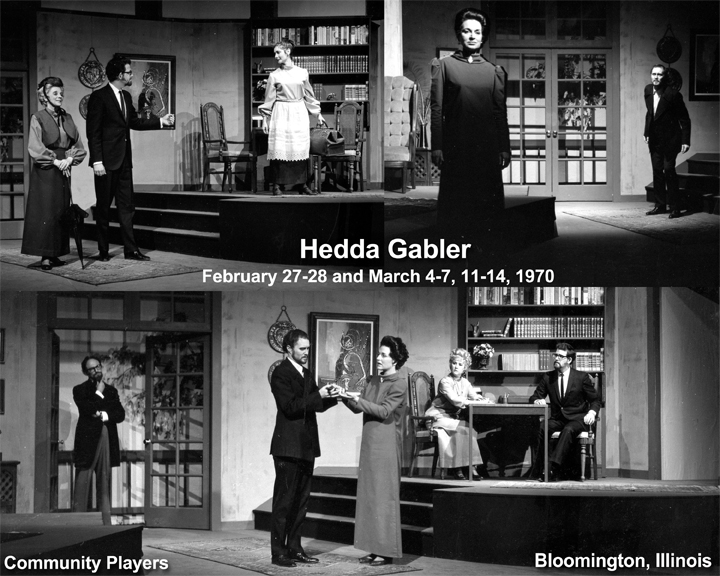 “Hedda Gabler” tells the story of Hedda Gabler, the daughter of General Gabler. Hedda has married George Tesman out of desperation. During their six month wedding trip, her husband has spent most of his time in libraries researching for a soon-to-be-written history. An old friend of Hedda’s, Thea Elvsted visits and tells Hedda of Eilert Lovborg, an old friend of both women. Eilert has also written a highly-respected history. His new book has all of the imagination and spirit that is missing from George’s book. Eilert, with Thea’s help, had given up a life of degeneration to devote himself to his writing. At Hedda’s prodding, Eilert goes to a party and loses his manuscript, while Hedda once again temps Eilert into drinking at the party. George returns with Eilert’s manuscript. Hedda takes and then burns the manuscript out of jealousy. She then proceeds to talk Eilert into commiting suicide. While Eilert does in fact shoot himself, he does not shoot into his temple as Hedda urges, but shoots himself in his stomach. George, with the help of notes provided by Thea, works to reconstruct Eilert’s book. Suddenly, Hedda leaves the room with her pistols, and commits suicide.

“Hedda Gabler” Henrik Ibsen’s 1890 play was able to be performed royalty free. In lieu of royalties, Community Players placed in the Normal Public Library two books on theatre world history and a book called Stages: A Fifty Year Childhood of the American Theatre by Emory Lewis in the Withers Library (now named The Bloomington Public Library). The version of the play used by the Players was written and translated by Dr. Alan S. Downer of Princeton University. The library books chosen were selected by Dr. Downer. In a note written to the Players’ board, Dr. Downer thanked them for selecting his translation of the play and the addition of the books to the two libraries.

In the “Hedda Gabler” program was “A Memorem” for Elias W. Rolley, a past actor and board member from the early 20’s to the 1940’s. Mr. Rolley passed on February 11, 1970. The signed photo portrait of Miss Rachel Crothers that was taken in Paris, France, was now hung in the lobby, through the cooperation of a friend of Players. As of 2014, the portrait is still hanging in the lobby.