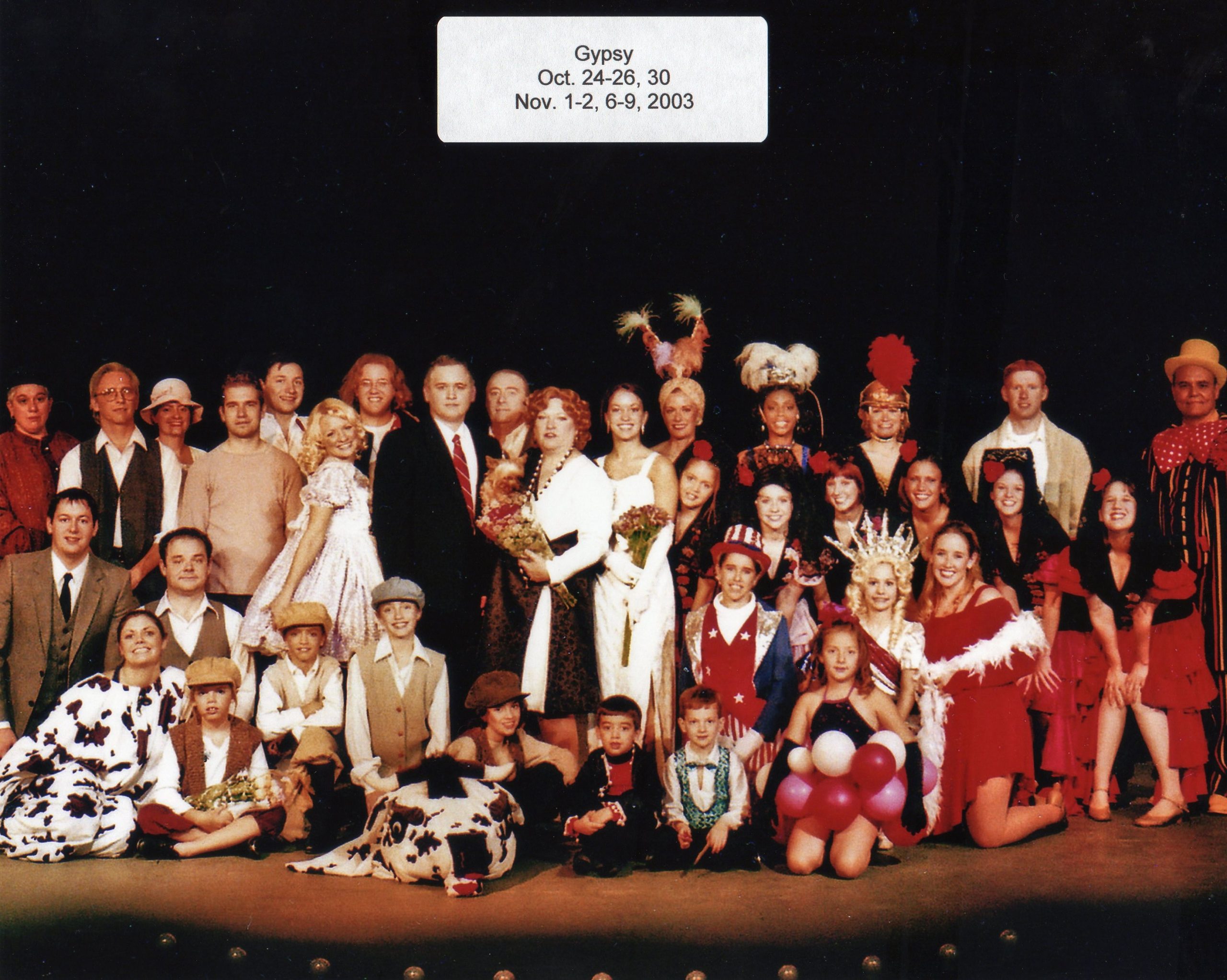 “Gypsy” begins in Seattle with stage mother, Rose, pushing her two daughters into Uncle Jocko’s Kiddie Show. June, her mother feels, is the most likely to become a star. Louise is plainer and quieter; she stands meekly in her sister’s shadow. A new act called ‘Baby June and her Newsboys’ is conceived by Rose, and the family is off to the ‘big time’ in Los Angeles. The act steeped in star spangled banners, dancing horses (Louise plays the rear end), and screaming newsboys moves to Dallas, Akron, New York, Buffalo, and Omaha. Along the way Rose meets Herbie, a theatrical agent, and hires him as their manager. He makes himself father to the troupe, sharing with them their meals of chow mein, Rose’s favorite food. Rose scrimps as she schemes and scrambles for bookings and billings to maintain their hand-to-mouth existence. Her object is to make her two penniless girls into world stars. The girls begin to grow up and the act becomes ‘Dainty June and her Newsboys.’ Unfortunately its quality does not improve. Bookings are cancelled and the act moves on. Louise wishes that Momma would marry a plain man so they could settle down. Herbie proposes but is rejected. June elopes with Tulsa, one of the boys in the act. Rose sets out to make Louise into the star. Finally the troupe reaches the bottom, a burlesque house in Wichita. Rose laments that she would rather starve than perform there. Louise realizes there is no vaudeville left except for burlesque. Here the clumsy Louise shoots into stardom by becoming something different: a ladylike stripper. At last Louise breaks away from her mother and goes out on her own as Gypsy Rose Lee.

Up next was the first time Players’ performance of the classic musical “Gypsy.” One very interesting situation occurred during the rehearsal period. On the stage the electrical power had to be turned off due to the installation of additional power to the building. The rehearsals were conducted in either the scene shop, lobby or on the stage with sets of work lights plugged in to either the shop or lobby. Despite all of these difficulties, “Gypsy” was a highly praised production by the reviewer and the audiences. The cast had 34 actors, singers, and dancers, and the orchestra had 17 musicians.

October 23, 2003, was a lighting celebration of sorts for Community Players. The Players were in desperate need of a new lighting system. The one that was in use was 35 years old, and had started to fail during the run of “Moon Over Buffalo.” In a special ceremony, the new switch was thrown at 7:30 to start the musical “Gypsy.” At a cost of of over $110,000.00, the system included new lighting fixtures and electrical upgrade to the building, tripling the lighting capacity and also increasing the flexibility for filling the stage with appropriate light for a scene. A fundraiser called “Keep the Lights Shining!” was started to help defray the costs of the new lighting system.

During the run of “Gypsy,” longtime Players and Community Arts figure Tony Holloway passed away on November 1, 2003, at the age of 81. Tony spent 44 years with the Players, including two years as President of Community Players from 1974-1976.