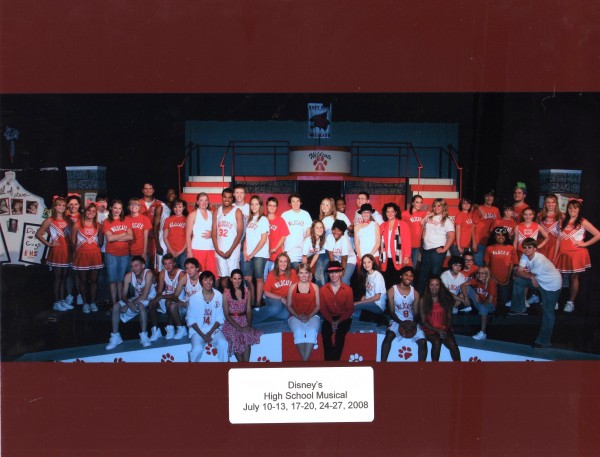 Troy, Gabriella and the students of East High must deal with issues of first love, friends, and family while balancing their classes and extra curricular activities. It’s the first day after winter break at East High. The Jocks, Brainiacs, Thespians, and Skater Dudes find their cliques, recount their vacations, and look forward to the new year. Basketball team captain and resident jock Troy discovers that the brainy Gabriella, a girl he met singing karaoke on his ski trip, has just enrolled at East High. They cause an upheaval when they decide to audition for the high school musical, led by Ms. Darbus. Although many students resent the threat posed to the “status quo,” Troy and Gabriella’s alliance might just open the door for others to shine as well.

The 86th Season at Community Players opened with Disney’s “High School Musical,” a Theater For Young People fundraiser. For $10 dollars worth of raffle tickets, a patron would have a chance to win a role and to dance in the final number of that performance. The two Grand Prizes, which included Park Hopper Passes to Disney World and airline tickets from Allegiant Air were awarded at the intermission of the last performance.

Disney’s “High School Musical” became only the second show to have more than 3,000 people attend it’s run. Its attendance was second only to the 1996 production of “Joseph and the Amazing Technicolor Dreamcoat.” More tickets for students age 15 and under were sold for “High School Musical” that for all of the other 2007-2008 season shows combined. The success of the show resulted in the completion of several projects around the theater including exterior painting, interior painting, and replacement locks and handles for the front doors.