Announcing the Cast of “Big Fish” 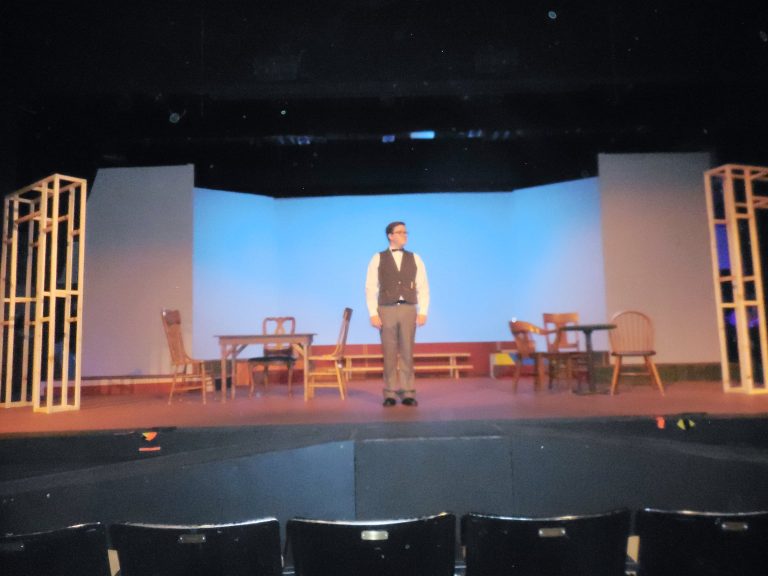 Players Visit Our Town Community Players will kick off a new decade by presenting one of the greatest American dramas: Thornton Wilder’s Our Town. When Our Town opened at Henry Miller’s Theater on Broadway on February 4, 1938, it shook the foundations of the American theater. At the time, realism dominated the Broadway stage, with set designs that sought to replicate the living rooms, parlors, or gardens in which the action was set and with acting that respected the so-called fourth wall; that is, the actors never acknowledged the presence of the audience, fostering the illusion that the spectators were observing something that was really happening. Wilder eschewed realistic sets, instead using chairs, tables, and step ladders to represent the environment in which the characters lived.
Read More

Come to the Cabaret on Robinhood Lane What good is sitting alone in your room? No good at all, not when you can come to Community Players’ production of the classic musical Cabaret. Cabaret, with book by Joe Masteroff, music and lyrics by John Kander and Fred Ebb, and original direction by the late, legendary Harold Prince, is set in early 1930s Germany, just at the end of the Weimar Republic and just before Hitler was appointed chancellor. An American, Cliff Bradshaw, has come to Berlin to try to write but instead gets swept up into the excitement of the Kit Kat Klub, where decadence and Nazism, hedonism and violence, come together in equal measure. He begins an affair with the exotic British singer Sally Bowles and soon finds himself torn between pleasure and responsibility, obliviousness and awareness, and the competing aspects of his own sexuality.
Read More

Announcing the Cast of Our Town

Announcing the Cast of Our Town THANK YOU to everyone who came out to audition for Our Town!  We had so many talented actors to choose from, and we hope to see all of you again at future auditions! CONGRATULATIONS to the cast of Our Town! CAST: Stage Manager – Dakota McDaniels Dr. Gibbs – Scott Myers Joe Crowell/Baseball Player – Jackson Thorpe Howie Newsome– Anthony Overton Mrs. Gibbs – Jen Maloy Mrs. Webb – Lynda Rettick George Gibbs – Allen Van Luvender Rebecca Gibbs – Morgan Rondinelli Wally Webb – Tyler Gray-Henry Emily Webb – Anna Sheltens Professor Willard – Jared Cantrell Mr. Webb – Bruce Parrish Woman in the Balcony/Woman Among the Dead – Cris Embree Man in the Auditorium/Man Among the Dead – Jim Kalmbach Lady in the Box– Opal Virtue Simon Stimson– Jason Cook Mrs.
Read More
1 2 3 … 37 Next »